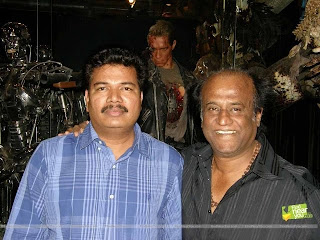 
Endhiran the latest offering from Shankar- Superstar Rajinikanth combo after Sivaji is just a hat's throw away from seeing the limelight as the post production works are almost done. Now the buzz is that the audio launch of Superstar Rajinikanth's Endhiran will be released soon and is guaranteed to be an over-the-top experience for movie buffs. Interestingly Sun pictures upcoming film 'Thillalangadi' had its audio launched at Sun Pictures studio itself believed to have been done to cut costs as Sun pictures previous outings have been entertainingly expensive. Finally we hear that Oscar Hero A.R.Rahman has completed the background score and Superstar Rajinikanth will be dubbing for his role as Robot Rajinikanth in Endhiran alongside his counterparts. Aishwarya Rai will not be dubbing for this film with her own voice instead Kaniga, Rohini or Aishwarya Dhanush will be tried out one hears.
Posted by giridhar at 10:26 PM