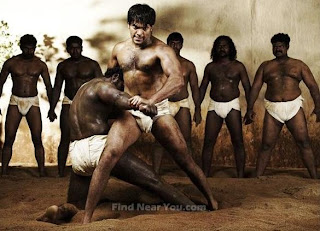 Set up in the pre independence era Madharasapattinam one of the touted toasts of Tamil films fails to make us say "Cheese" on seeing it. Director Vijay being an assistant to Priyadarshan who has a penchant for period films seems to have been inspired by him to make a period film but has greatly failed to cope up with the art of narration in the film. The film opens with Amy (Amy Jackson) in London who is waiting for her last call and wishes to pay a visit to India and on her jaunt along Chennai City she takes us to her flashback to Madhrasapattinam.Amy(Amy Jackson) is the enchanting daughter of the then British Governor and Ilamparithi,(Aarya) is a Dhobi as well as a wrestler. How these two fall in love and what happens in a predictably shocking climax is narrated from the eyes of the Amy .The film seems to have been inspired big time by the Oscar film Titanic of James Cameron which had the old lady glimpsing on her flashback and the similarities don’t stop with this. As in Titanic even here the heroine gets engaged to a baddie and falls in love with another man. The whole film lacks clarity especially the first half. The film from its narrative aspect never enthralls the viewer who is hardly interested in the film. The face saving stunt comes from Aarya who excels in his role as dhobi cum wrestler. Amy Jackson impresses all with her looks and there is nothing more to quote about her. Late actor Cochin Hanifa has done his part to perfection whilst other character artists like Ms Bhaskar,the British cop do not get much scope to perform. Very few scenes spring up the audience and some are bound to get puzzled with the English dialogues with Tamil subtitles which makes the film well out of reach for the suburbs and villages. The reason for a British Governor's Daughter falling in love is unconvincing that one feels the Director could have come up with a better one. The highlights of the film are the art direction and cinematography which never falls short of our expectations. Cinematographer Nirav Shah has come up with a great visual treat which has been supported by Selvakumar's Art. Both of them should be commended for their efforts which makes the film worth watching.GV Praksah's music which was hardly impressive will be forgotten once the film is over. We can also understand the amount of pain taken by director Vijay to recreate the old madras magic which wins him many applause. It is not every weekend that we come across a period film and we all wish Vijay could have done far better in his Titanic inspired Tamil flick. On the whole we must applaud Vijay and the producer Kalpathi S Agoram for this brave attempt but not surely the best of attempts.

Bototomline: Titanic without a ship
Posted by giridhar at 3:02 AM