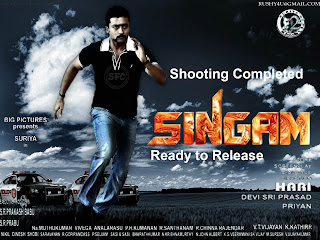 Surya’s most expected movie ‘Singam’ shooting has been completed fully. Recently Surya and Anuksha along with crew members has flown to the exotic locations of Dubai along with choreographer Brindha to shot for a song.

As per source the movie dubbing works have already started herein Chennai and will be completed within couple of weeks.

Singam is being produced by Studio Green Productions Gnanavel Raja, uncle of Surya. Prakash Raj does the villian role in the movie and Vivek takes care of the comedy. Devi Sri Prasad has scored music for the film.

Singam is one of the most expected movies of 2010 since Surya is back after hat trick of Box office hits with Vaaranam Aayiram, Ayan and Aadhavan.

Singam will hit the screens in the month of April and it will be the big summer release of Kollywood.

Posted by Avatar Movies at 3:13 AM